thorn in my side 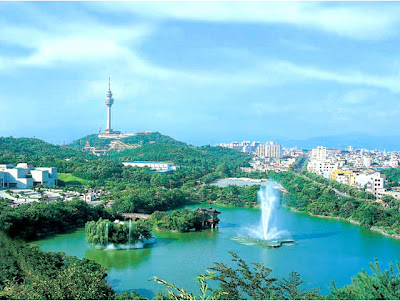 i spent this sunday on the town! downtown daegu is a shopper's dream....i never identified myself as one who loves to shop, but a new and mysterious part of me is beginning to emerge on the streets of daegu! as soon as i stepped off of the subway i found myself in an underground shopping mall. it's really quite something! i made my way into "deiso," a japanese dollar store, where you can get everything from cookery to shoes to fake flowers to rugs to cleaning supplies, all for 1000 won. right outside of the subway station there is a giant bookstore, which includes a massive stationery wing where i got lost for well over an hour! i have always been a letter writer and collector of paper and greeting cards. i might as well admit that for most of my life i have also had a strange fascination with cool pens, pencils, erasers, notebooks, journals, etc! it turns out that i have moved to the right country. stationery and office supplies are a thriving industry here - puts office depot to shame! my students come into class each with their own pencil box filled with a dazzling array of goodies....and not a single student has the same notebook. i stand in awe every class period! (and occasionally a twinge of envy! but now i've found out where they shop!!) tomorrow i will be showing up to class with my own shiny new pencil box spilling over with every color of the rainbow ballpoints, mechanical pencils, and hello kitty erasers!
just two blocks from the subway station there are pedestrian-only shopping streets lined with boutique after boutique sporting some of the most stunning clothing, shoes, handbags, belts, and jewelry imaginable! daegu is reknown for being a leader in korea's fashion and textile industry. 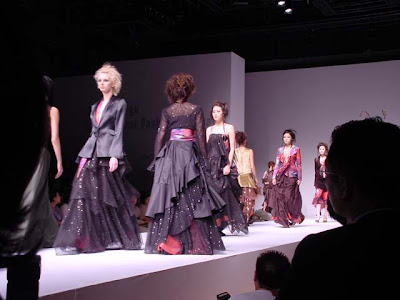 i felt slightly dowdy romping down the streets in my jeans, t-shirt and backpack when most everyone else was dressed to the nines with their sassy handbags (men included). every now and then i passed a couple strolling hand in hand wearing identical shirts! yes, young couples here wear matching outfits! a sign of undying love and devotion, perhaps!???
after a good five hours of meandering from shop to shop, i did what i swore i would never do. i set foot in a starbuck's. after i learned what corporate business was all about, i decided to support local businesses as much as possible instead of feeding the big machine.....i thought i had learned well....but it feels like a bout of amnesia has come over me because since i've been here, i've done way too much shopping at E-MART (which, by the way, replaced walmart all over korea because walmart couldn't make it here. HA! but it only takes two seconds to figure out that most likely e-mart is walmart dressed in slightly fancier clothing. ugh). here are sarah and shawn on the cart escalators during one of our mad shopping expeditions at the corporate megamart: 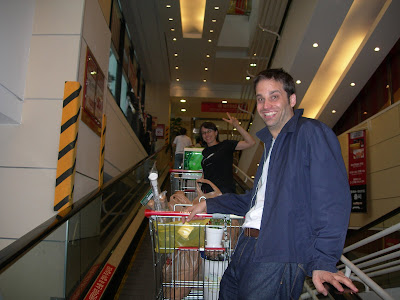 but, back to starbuck's (part of my temporary amnesia).....the moment i opened the door i felt as though i'd stepped into the western world.....a severely overpriced version of this world, but a familiar world. i ordered a slice of new york cheesecake and a tall cafe latte (coming to about 10 bucks). mmmmm....mmmmm. i sat down at a table by the window and indulged myself while gazing out at the passers by....some of whom wearing their devotion on their sleeves, others decked out in their finest, all holding umbrellas in the drizzling rain....and i felt part of this city, ratty old jeans and all....i felt welcomed and embraced by this vibrant and beautiful community.....gratitude washed over me....and even though the thorn of knowing i was supporting corporate business was poking me in the ribs, i felt desperate for something familiar. starbuck's met that need today. i don't plan on supporting the monster much while i'm here, but when the symptoms of culture shock blindside you in the middle of a rainy sunday afternoon.....you gotta do something! there is a chain of pizza huts here, so it's possible that a rendezvous with that western phenomenon will meet the sudden need for familiarity when it hits....but honestly, i've heard the pizza just doesn't taste nearly the same....alot of sugar is added to the tomato sauce, there are completely different toppings and the crust is made with rice flour. i just don't know if it'll work. 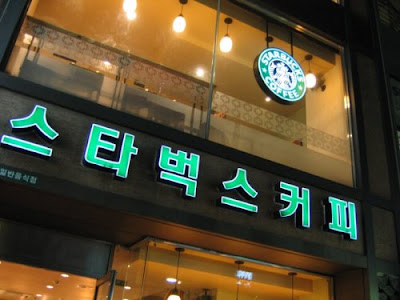 fyi: the first two photographs are from the official daegu website: http://english.daegu.go.kr/AboutDaegu/photo_intro.asp
Posted by Jessa at 8:51 PM