the day after the tara concert (october 18th), we all boarded a huge bus and headed out for hwaeom temple on jiri mountain. on the way we stopped for lunch in the city of jeonju - famous for its BIBIMBAP! bibimbap is a very popular korean food - a bowl of rice and a myriad of veggies with the ever accompanying RED PEPPER SAUCE. we ate at the best bibimbap restaurant in town which just so happened to have a bibimbap museum as well! i stole away from lunch for a few minutes to educate myself more fully about this particular form of korean cuisine.
a larger than life-size exhibit of standard bibimbap - notice the raw egg on top....and the dopple of red pepper sauce 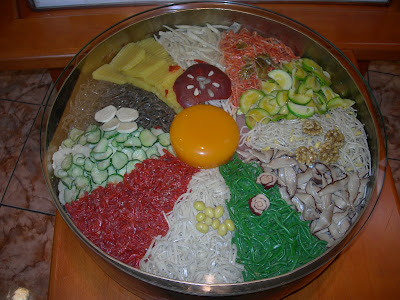 this is dol sot bibimbap (hot stone pot bibimbap) which i favor because the bibimbap is served in a stone bowl that is piping hot so when you stir up the rice and veggies, the raw egg COOKS. i've never been one for runny eggs. 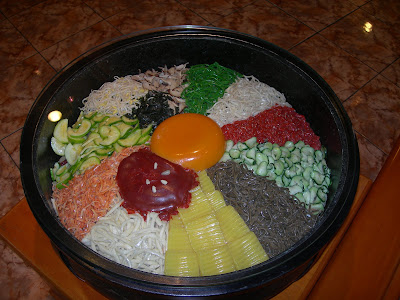 a few of the many, many styles of bibimbap! each major city in korea has its own special version of this dish! 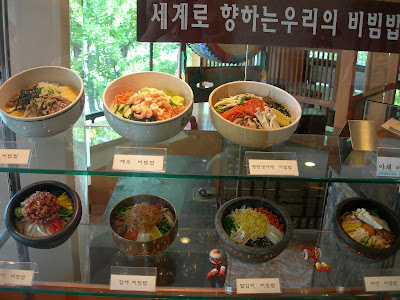 an cute little exhibit of all the happy folks eating bibimbap! 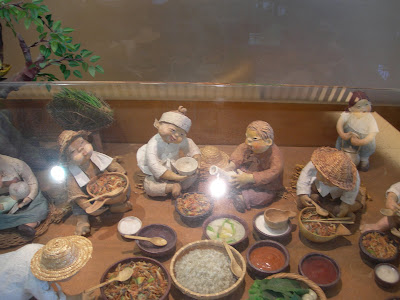