october 19, 2007: after the tea ceremony with the monk (see previous blog entry below), the musicians spent the afternoon rehearsing for the upcoming performance and i meandered about the temple soaking in the beautiful sights and sounds..... 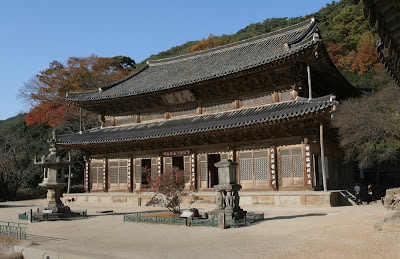 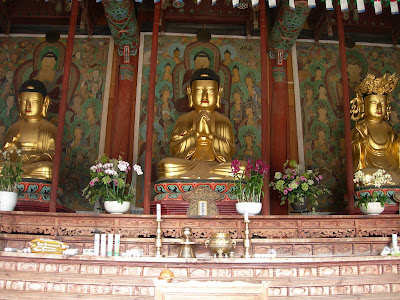 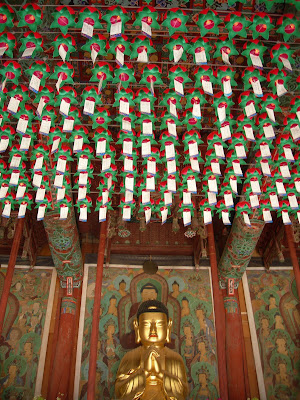 i made a new friend at the monastery. his name is jong sah. he has been a monk at hwaeom temple for 30 years. he spoke great english! we had quite a ball together while the musicians were all rehearsing. we walked around the temple grounds chattering away. he spoke to me of how the mind is like the passing clouds overhead.....i told him that i had partly come to korea to cultivate a daily meditation practice and explore the idea of what it might be like to live a monastic life. he looked me straight in the eyes and enthusiastically said, "the nuns live five minutes from here. you talk to the nuns, they will let you live with them!" i burst into laughter, thanking him profusely, telling him i would think about it! i asked him if he had had relationships before he became a monk. he laughed a full and hearty laugh and said, "no, no! relationships bother me!" "relationships bother you?! what do you mean?" i couldn't help but ask, i was so filled with curiosity. he answered that relationships limited him, he had to do this and had to do that....and on and on....then with arms outstretched, he broke into a dramatic "FREE AT LAST, FREE AT LAST, THANK GOD I'M FREE AT LAST!!" referring to his entry into the monastery!! he had me rolling on the floor, laughing so hard! 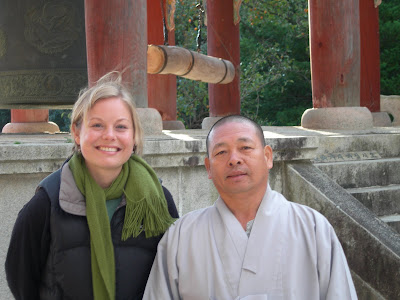 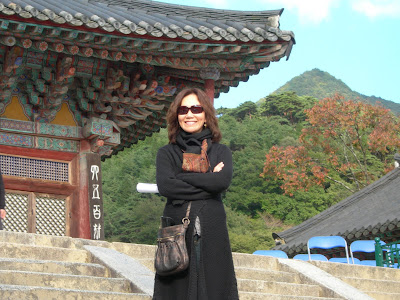 cho soon ae - 79 years old!! her voice is like a deep rumbling inside of the earth - it made the hairs on the back of my neck stand on end!! she is a master of pansori (a genre of traditional korean music). 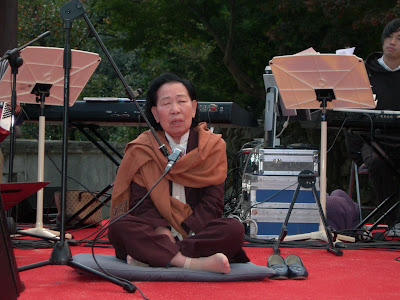 cho's drummer, who i hear is quite a heartthrob here in korea!! 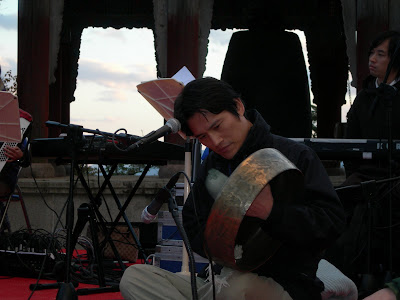 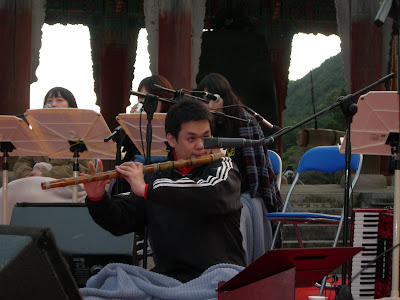 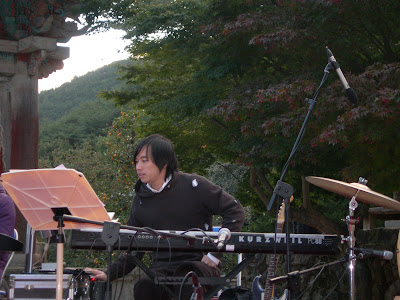 the chorus of singers dressed in traditional korean hanboks 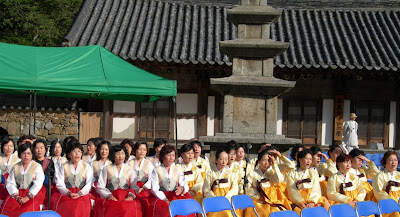 jennifer and manish - sportin' the energy drinks and pills that the stage managers handed out to all of the performers to keep them going through the long afternoon of rehearsals!! 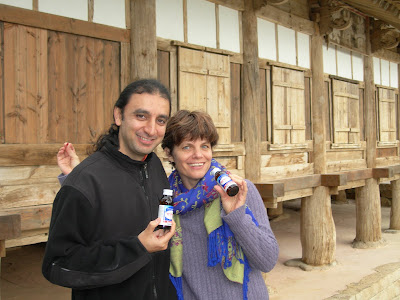 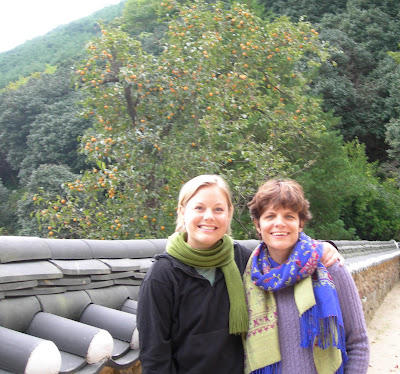 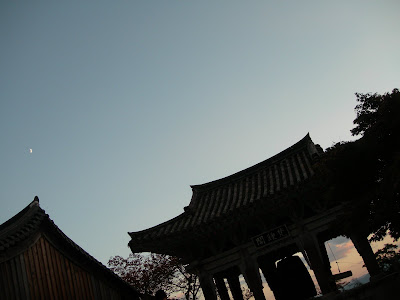 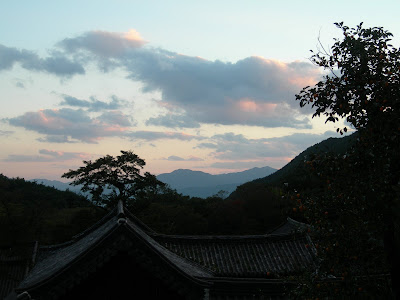 the head monk talking with jungmyung. check out this guy's outfit! i love it...especially his hat! 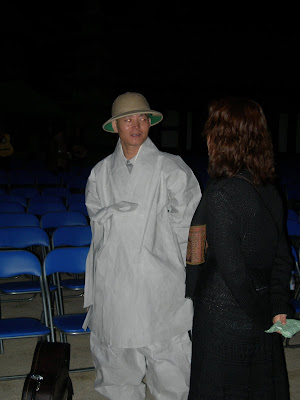 the monks drumming in their evening ceremoney 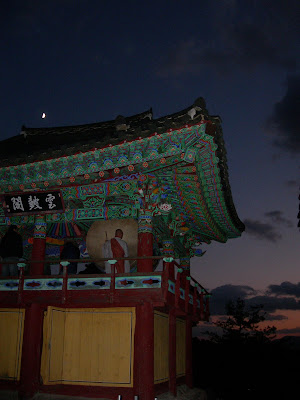 the head monk invited us all to a traditional korean dinner at a nearby restaurant. 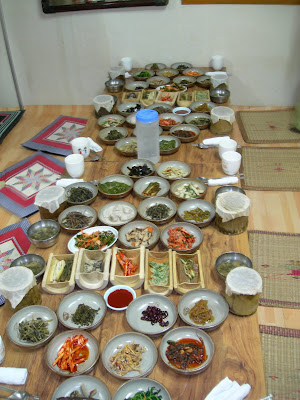 rice with a lotus blossom steamed in bamboo..... 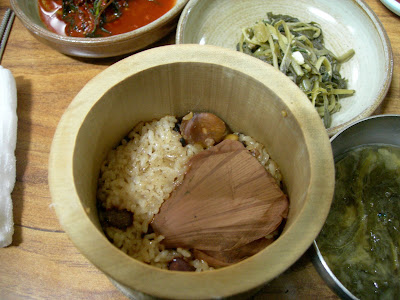 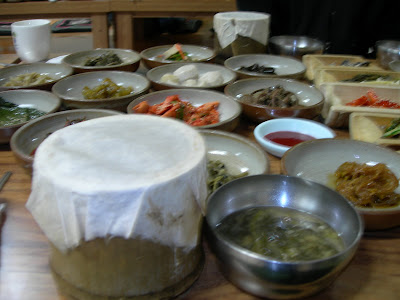 i can't believe manish caught this particular moment on camera! jennifer was going on and on about how my eating habits have changed dramatically since i moved to korea! according to her, my midwestern manners have been tossed out the window! never mind the "please pass," i now reach across the table with my chopsticks to grab whatever it is i desire and i wolf down my food more quickly than she does! (which is something we never would have guessed would happen in this lifetime!) the look on her face says it all!! 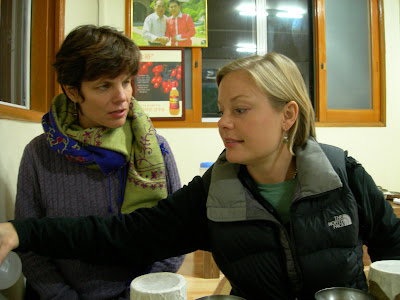