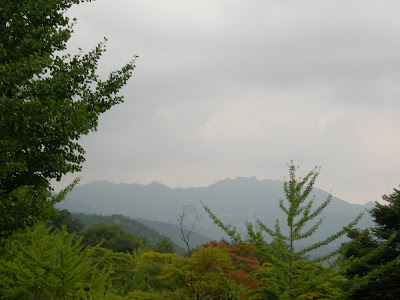 i received more of a workout today than i could or would have ever bargained for! and my knees are barely here to tell the story.....
before i begin, i will say this: i'm finding it to be a rare and wonderful experience to be living and working in a foreign country where i don't speak or understand the language much at all because the ambiguity within most situations is so extreme that it provides a really good opportunity to practice just showing up and keeping an open, curious, and amused mind!
a couple of days ago, my co-workers and i received an email from the administration informing us that there was a hike on mt. palgongsan being organized to take place on the upcoming national holiday ("korea's foundation day"). 8 of us signed up, including the director of our department: dr. lee, his wife: ta-ock, and the general manager: mr. yoo. when we arrived at the foot of the mountain, we (the five foreigners) found out that this was in fact a huge event that happens every year for all of the alumni and professors at yeungnam university - there were about 600 people signed up for this hike!!! as part of the festivities, we all got a really spiffy, free backpack, a bottle of water, a lunch pass, and a raffle ticket! FUN! at about 9:15am we began the hike and let me tell you, i had no idea what i was getting into. the first mistake i made was in wearing jeans. by the time i got to the TOP of this gigantic mountain i looked as though i'd just stepped out of the shower with all of my clothes on. i was absolutely DRENCHED in sweat. secondly, i did not train for the event. in preparation, i should have been running at least five miles a day, lifting weights and eliminating all sweet treats from my diet. i was huffing and puffing like no other. there was a moment when i truly thought i would have to lay down on the ground and go no further. granted, the incline was about 90 degrees for the entire hike up. as one of the english teachers said, "there are no switchbacks in korea." this is most certainly true. it is one straight shot UP the mountain. but at least today, there was something very exciting waiting for us there! at the very top, there were yeungnam alumni cheerfully greeting each hiker with a dixie cup of makoli (rice wine). it tastes something like what beer and yogurt might taste like mixed together. you wouldn't believe how refreshing it was! here is the view upon arriving to the top of the world....surrounded by clouds! 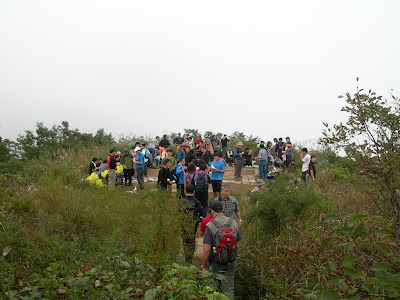 and alex brought cucumbers that he was so kind to share with us.....usually, cukes are one of my last veggies of choice, i will even go without....well, the sight of them on top of that mountain made me salivate and almost go nuts! here's sarah, with her giant smile and me, with my slicked back wet head and sweat dripping down my face - cukes in hand and never happier! 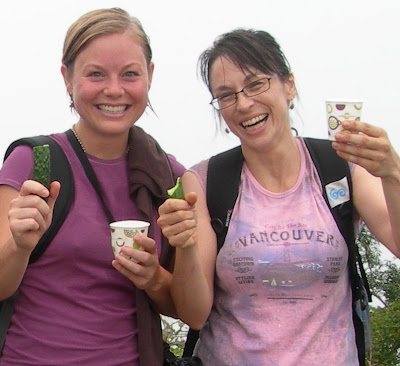 to be up amongst the clouds made for some dramatic views....bringing the other mountain peaks into focus only for moments at a time..... 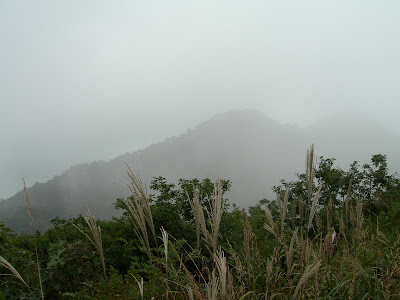 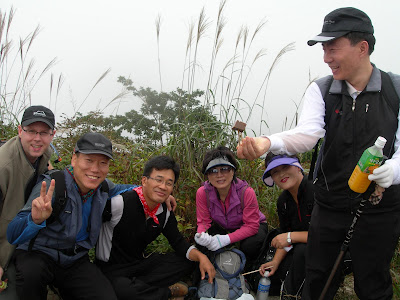 shawn chowin' down on some kimchi! 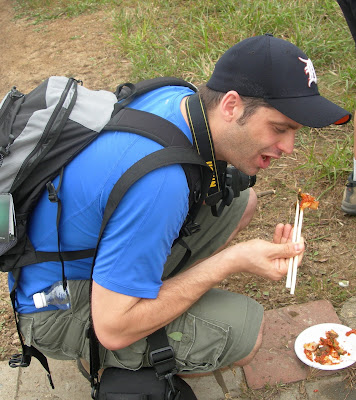 on the way DOWN the mountain we split up and dr. lee, ta-ock, barbara and i formed a cohesive group based on the common desire to take lots of little breaks along the way! we chattered away (apparently a little too much because we missed our trail) and saw some amazing rock formations and gnarly trees.... 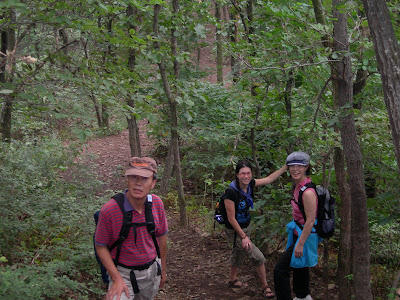 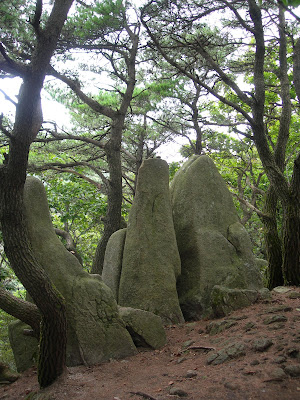 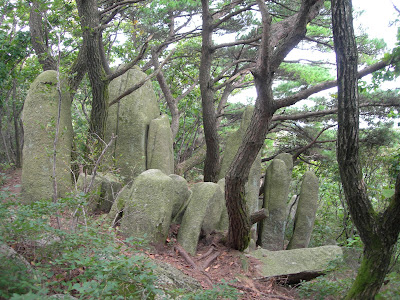 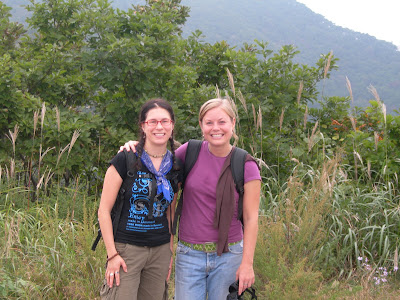 about 45 minutes into our descent was when serious ambiguity struck us all and the workout we'd bargained on tripled exponentially. we decided to ask some fellow hikers if we were heading in the right direction.....the conversation led me to believe that there were differing opinions and very possibly it could be that no one was quite sure....except for one thing: we were lost.it turns out we had to backtrack about half an hour. this news was disheartening as my knees, barbara's, and dr. lee's were already starting to ache. but we trudged on....i kept hearing over and over in my head that line from the cheezy sunscreen song (graduation address to the class of '99): "be kind to your knees. you'll miss them when they're gone." and a quote that i have no idea where i picked up, "you're only as old as your knees," kept obsessively repeating itself in my brain. well, if that's really true, then i am surely over 90. by the end of our hike i was barely able to bend my left knee, making it excrutiatingly painful to go downhill, even to walk on flat terrain. i felt that at any point my knee might decide not to function anymore and i could very easily fall flat on my face. it took a tremendous amount of focus to just get down that mountain in one piece. here are my hiking companions....just about to the bottom of the mountain. 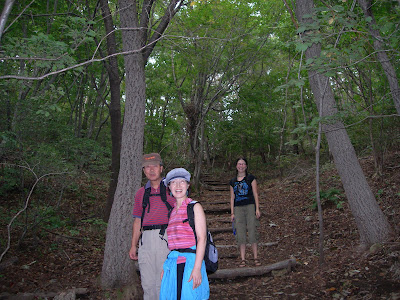 five hours after beginning our mountain hike, we arrived back to find all 600 yeungnam alumni/professors sitting in bleachers being entertained by a comedic mc who was handing out raffle prizes and making people do crazy, embarrassing things.....we served ourselves what little lunch was left on the buffet table and sat down to observe the festivities! not even 5 minutes into our meal, the mc made his way over to our table and began harrassing us to come up in front of the audience and make fools of ourselves. "english teachers, english teachers, come here, sing a song, dance!" oh my god. no. tell me this is not happening right now. my knees are so stiff there is no way i will be able to get up out of my chair. no. just let me eat my lunch. i have worked so hard for this lunch. this is not happening. but, it was happening and i did hobble my way out into the arena with the other foreigners to become the laughingstock of korea. after we were interviewed, we did sing a song. well, sort of. sarah and shawn sang the song because sarah is a professional singer and they could both read the korean lyrics on the karaoke screen....barb and i just stood behind them "singing backup," swaying to the music, and laughing alot! it was quite hysterical. sarah and shawn got prizes for their stellar singing (a blender and a gift pack of liquid ginseng). it was quite a trip!
i got home and soaked in my miniature bathtub for an hour.....it still hurts to walk, but i think i'll live. looking back, it was an extraordinary day - to be hiking vigorously in the mountains of korea....surrounded by pristine nature....being graced with the beauty of the changing leaves of autumn....walking through the occasional mist of feathery clouds...and to be in the company of such great people. 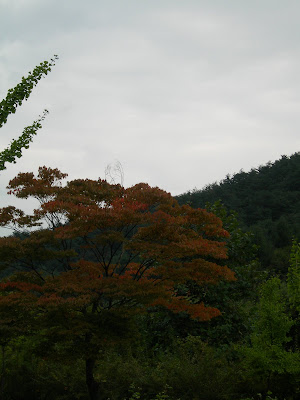 What a trek! Pretty pictures!

Take care of those knees :)