one of the most important books i've read 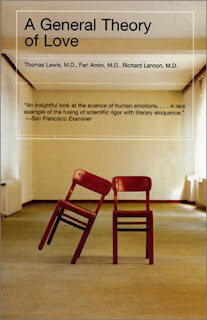 tonight, i curled up on the couch and finished this book. i feel infinitely grateful that this stunning read crossed my path. this book has blown open my understanding of human intimacy (both in general and my own particular strands of experience). it's written by three doctors from the university of california san francisco. the synopsis reads:
"'the heart has its reasons whereof reason knows nothing.'
in this fascinating account of the psychobiology of love, the authors uncover proof of pascal's famous statement. drawing on new scientific discoveries about the human brain, they describe the workings of our ancient, pivotal urge for intimacy, revealing that our nervous systems are not self-contained: from earliest childhood our brains actually link with those of the people close to us in a silent rhythm that makes up the life force of the body. these wordless ties determine our mood, stabilize and maintain our health, and change the structure of our brains, so that, in a very real sense, who we are and who we become depend on whom we love..."

the authors explain how our limbic systems are open-looped, meaning we are not totally self-contained or self-sufficient. the western ideal of the rugged individualist is nothing but a daydream here in limbic reality. we are conditioned to think we can make it on our own, as independent beings. our limbic brains beg to differ.
it is encouraged in the west for parents not to allow their babies to sleep with them in the same bed (move infants towards independence right at the get go), however just about everywhere else in the world children sleep with their parents for the first few years. here in korea, entire families sometimes sleep together on the floor in the same room. it is almost completely unheard of for a baby to sleep apart from his/her parents (i've been asking around!). "a general theory of love" goes into detail about the crucial limbic rhythms and regulation that develop when babies/young children sleep next to their parents. i think we in the west forget that most of the world lives more communally than we do. we mistake our way for normal...for superior.

just a little background: the limbic brain evolved after the reptilian brain. it brought forth a fresh neural structure that allowed mammals to care for one other, to form close-knit, mutually nurturing groups (families/communities), and to experience feelings/emotions.
the neo-cortex is the most recently evolved and is the largest of the three brains in humans. it rules the intellect.

in the authors' own words:
"evolution has given mammals a shimmering conduit, and they use it to tinker with one another's physiology, to adjust and fortify one another's fragile neural rhythms in the collaborative dance of love...we call this mutually synchronizing exchange limbic regulation...
because human physiology is (at least in part) an open-loop arrangement, an individual does not direct all of his/her own functions. a second person transmits regulatory information that can alter hormone levels, cardiovascular function, sleep rhythms, immune function and more - inside the body of the first...
even after a peak parenting experience, children never transition to a fully self-tuning physiology. adults remain social animals; they continue to require a source of stabilization outside themselves. that open-loop design means that in some important ways, people cannot be stable on their own - not should or shouldn't be, but can't be... stability means finding people who regulate you well and staying near them...
this necessary intermingling of physiologies makes relatedness and communal living the center of human life. we recognize instinctively that healthy human beings are not loners. of his famous retreat to walden pond, thoreau wrote, 'i went to the woods because i wished to live deliberately, to front only the essential facts of life,' but he did not front them alone. his nearest neighbor was but a mile distant, and the city of concord two miles; thoreau depended on both liberally, and dined frequently with friends."

a bit more...
"because limbic resonance and regulation join human minds together in a continuous exchange of influential signals, every brain is part of a local network that shares information... all of us, when we engage in relatedness, fall under the gravitational influence of another's emotional world, at the same time we are bending his/her emotional mind with ours. each relationship is a binary star, a burning flux of exchanged force fields, the deep and ancient influences emanating and felt, felt and emanating.
the limbic transmissions render personal identity partially malleable - the specific people to whom we are attached provoke a portion of our everyday neural activity. in the vistas of imagination, the self is a proud ship of state - subject to the winds and tides of circumstance, certainly, but bristling with masts and spars and beams, fairly bursting with solidity. we would scarcely imagine that identity could be as fluid as the seas that supposed self rides upon."

i'm SO glad i read this post. by the end of last semester i realized that i was severely lacking in relationships here and this semester i am intentionally trying to be more connected. your post has reaffirmed in me the "rightness" of my need to connect and be connected. it also helps me feel deeply satisfied with my current partner and the stability he brings into my life. it also helps me realize why i am affected by others subtle emotional shifts. thanks again ...

this book blew me away...in such a culture of individualism, i often forget how innate and appropriate it is to long for connection...to NEED connection with others. i'm so glad it validated what you've been feeling lately...

i like the way you phrased that ... innate and appropriate ... that resonates with me :)