i dream of africa 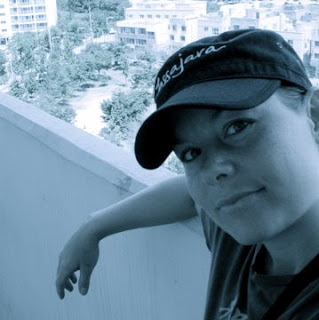 the yeungnam university track surrounding the soccer field. a 5 minute bike ride from my apartment. when i arrived this morning a soccer game was already in full swing. i love running while there's a lot of excitement and action going on down there. i also love the times when there's not a soul around, just me and wind, sky, track and field. 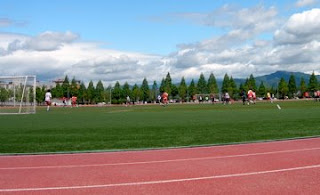 i have been running every other day for three weeks now. i started out thinking i would run a mile and then add on 1/4 mile every run. after a week of doing that i discovered that i'd been running two miles from the get go and had been adding 1/2 mile to each run! embarrassing mistake, indeed, and shows how little i've actually run in my life!! however, i was ecstatic to find out i had been wrong! since then, i've been running about 2.5-3 miles each time i go. sometimes more... when that "runner's high" kicks in, it's like i could run forever. i have never experienced that sensation until now. it's incredible.

i don't know exactly how to describe this urge to run, but it took me by surprise one sunday afternoon and hasn't let me go. my body is eating it up. i feel more physical stamina than i have felt in....well, a very long time. during a run, i feel as though my mind and body are set free. soaring, clear, strong, without bounds. after a run, i feel at peace, whole body relaxed, mind sharp and at ease. i feel a renewed sense of connection with my body and the immeasurable blessing of good health, strong muscles and sturdy bones. it's amazing the things we lose sight of and take for granted when we are lost in thought. 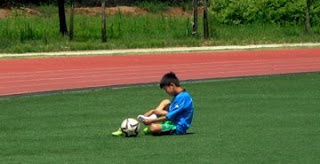 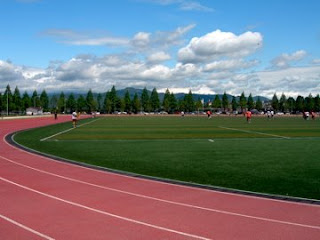 basketball courts in the distance 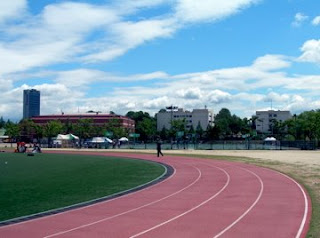 on my way to and from the track, i bike by this beautiful view 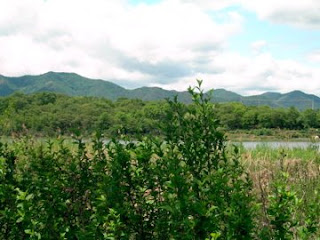 and this sweet little brown creek with weeping willows and rushes 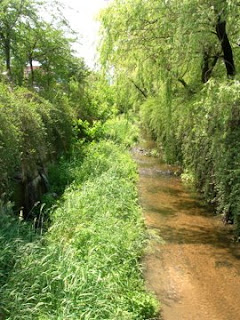 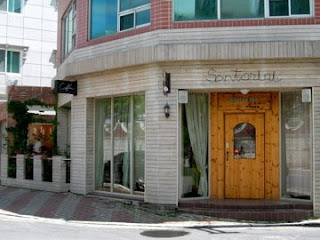 yesterday afternoon, i took myself and my umbrella out into the rain to santorini. during the course of sipping down two pots of loose leaf earl grey (with a little steamed milk on the side) and two pots of chamomile (to balance out the black tea buzz as the hour was approaching bedtime), i read "a new earth" by eckhart tolle and wrote in my journal. i was there for about 4 hours. i've taken to writing down passages that especially resonate while i'm reading and then if thoughts arise or memories, i record those amidst the quotes in a different color ink.

in chapter 3, "the core of ego," a part about forgiveness really struck me. eckhart talks about the nature of grievances and how we must look very honestly to see how we harbor them. we must become aware of the grievance on the level of thought and the level of emotion, which is the body's response to those thoughts. then, instead of TRYING to let go or forgive, which he says never works, forgiveness will naturally happen when we see that the grievance has no other purpose other than to strengthen a false sense of self, to keep the ego in place. forgiving is an undoing of one of the main egoic structures of the mind. 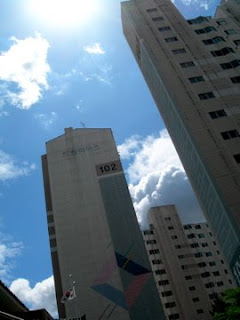 an updated view from my 10th floor front door 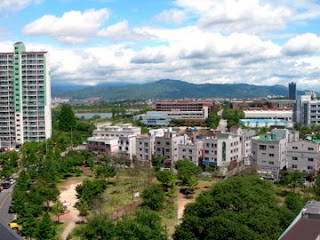 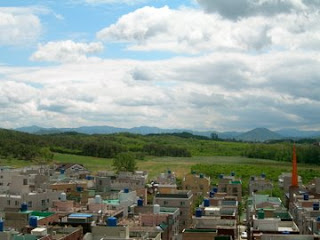 this afternoon, kate and i went on a mini adventure to check out what we thought was an african restaurant that opened recently! it's called "AFRICA." after visiting, we still cannot figure out why it's been given that name! nothing about it even remotely resembles anything pertaining to africa. kate ordered "tenderloin rice" and i had "cheese oven spaghetti" (most menu items were a mystery, even though they were written in konglish, as well as korean, but still nothing african, i promise you)! the ambiance was posh. the food pricey but actually very good. my oven baked spaghetti was the epitome of comfort food. just what i needed after my long run this morning!!

after eating, we meandered a bit outside, as the restaurant is located in the countryside on the outskirts of yeungnam university. we came upon several newly built, western-style, suburban homes with white picket fences, decks equipped with weber grills and grassy lawns with blooming flowers and fruit trees. a scene i would turn my nose up at back in the states, thinking: "oh, that is so suburbia, cookie-cutter homes, picket fences, ICK!" it's strange the things that happen when you are gone from home for a long time and suddenly see something familiar in such a drastically different culture. my heart began to ache. i could actually feel a deep pain in my chest, a longing, a missing of home...of something so deeply familiar and comforting, from all the way back into childhood. kate and i both stood speechless, staring at the white picket fence scene in all its archetypal glory... then we both turned to each other and shook our heads, smiling in awe. then kate said to me, "do you think anybody who lives in those houses might want to hire a couple of english tutors?!" i said, "let's go see!" we didn't (not yet anyway!), but we both agreed that we'd revisit this place sometime soon. we both noted that the smells in the air were even reminiscent of saskatchewan...of the midwest...of the places we've known for most of our lives as home.
Posted by Jessa at 4:56 PM

1. i'm SO jealous of your running!! :) i was a runner for over 10 years and i totally know what you're talking about - the physical and emotional sensations. sadly i stopped last summer b/c that seemed to be what my body was asking for at this point in my life. i hope to take it up again in the future ... are you still running?

3. i also totally "get" what you're talking about regarding the picket fence situation. i also love to see/ache for home when i see things that remind me of home, even if they aren't something i treasure when i'm back at home.

4. i've seen a sign for a restaurant called AFRICA in seomyeon ... i bet it's the same chain! ha ha. i'm glad i read your post - you saved me from making your mistake and heading in for some african food.

dear e...trust your body! i worked out HARD CORE through high school, college and for a few years after...then my body cried out for a break. now, as i'm settling into working out in a disciplined way again by running. mixed with yoga and qigong it's different. WAY DIFFERENT. it's much gentler...not the old compulsive energy behind it.

yeah....definitely save yourself from making a trip to "africa!!" unless, of course, you want the quirky experience of it all!