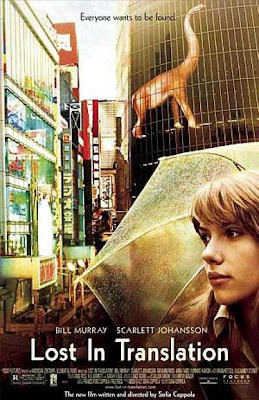 directed by sofia coppola, this movie came out in 2003. had i viewed this film before moving to asia, i don't think i would have understood it in nearly the same way as i did tonight. i kept thinking "i totally get this! this is how it feels to go to the doctor and have him explain my ailments in korean as if i can understand every word....and this is what i look like as i sit there stunned and clueless with a blank stare on my face. and this is how it feels to try to operate korean appliances (washing machines, exercise equipment...) by trial and error and have some downright hilarious and at times nearly fatal happenings because of it! if you haven't seen "lost in translation" you've got to rent it simply for the scene with bill murray on the eliptical machine! you will be on the floor! and the scenes where bill has someone translating for him, it's hilarious because the person speaking japanese goes on emphatically for two minutes straight and then the translator turns to bill and says one or two lines in english! and he exclaims, "that's it? that's all he said? it sure seemed like more than that!!" this is SO how it is!!! i can't tell you how many times i am left wondering "what did she REALLY say?" "what are they NOT telling me??!"
and seeing all the flashing, buzzy neon lights and the hoards of people milling around till the wee hours of the morning.....it actually gave me a cozy, at home sort of feeling...like, "yeah, i know this scene.....it's familiar....i live here." and even though the air quality makes me not want to breathe....i will miss this place so very much when it comes time to leave.
Posted by Jessa at 9:56 PM