her vow to always return in female form 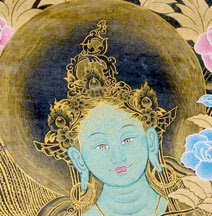 green tara.....fierce female bodhisattva...goddess of compassion....as the story goes, tara wanted to receive the teachings of the buddha, but the monks would not allow it because she was a woman. so, she began to study and practice on her own. over time, she became enlightened which the monks could not help but notice, however, they would still not allow her to study or practice with them...instead, they wished her well in being born a male in her next lifetime so that she could become part of the sangha (community of monks). it was at that moment that tara vowed to always return in female form.
Posted by Jessa at 8:44 PM

Thank you for this post and of Tara! Om Tara Tut Tara Ture Swa Ha!

In honor of Green Tara and returning always in Female Form I placed my Green Tara necklace by Laura Amazzone around my neck. I had also neglected my Kwan Yin statue on the front porch, so I dusted her off, lit candles and incense - our front porch is alive with aroma and vibration. Thank you for reminding me about Green Tara - and all the Female Bodhisatvas

Think what the monks missed out on because of their hide-bound acculturation.

Perhaps because my path to Buddhism has come through American yoga, which still tends to be more popular among women than men, I can't begin to imagine Buddhism without women leaders.

My first (and still most important) teacher was a quiet, old woman who was more full of life and understanding than anyone else I'd met. She taught me the loving-kindness meditation as the most natural thing in the world.

it is such a gift to receive your beautiful comments.....thank you so much.