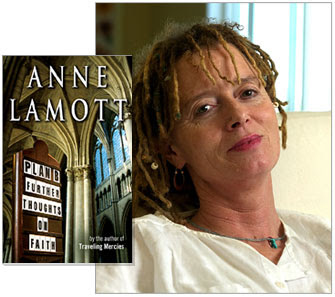 "i wear something around my wrist that one would not expect a presbyterian woman to wear; a thin red cotton cord that was blessed by the dalai lama, and given to me by my buddhist friend jack kornfield. it's quite ratty, with what look like rings of laundry lint circling it. i separate these rings with my thumbnail when i am fidgety, as if counting with the beads of an abacus.

jack and i take walks every few weeks, when we are both in town, often in the hills above the meditation center he founded nearby. he teaches his students, and has taught me, to slow down, breathe, and take care of everyone, which is of course the same message jesus taught - that breath is our connection to holy spirit, to our bodies, minds, and soul....jack is about my age and height, slim and very jewish: he brought me homemade chicken soup last time i was sick in bed. he also seems vaguely east indian, smooth and brown, and gives off a light, spicy, ancient smell.

breathing has never been my strong suit. i've never been very good at breathing. when i was young, i was afraid that if i stopped remembering to breathe, i'd have cardiac arrest. i was always much better at holding my breath for long periods of time, the length of the pool or of the tunnel that leads to the golden gate bridge. at the age of two, i used to hold my breath in public until i passed out. my first memory is of coming to on the planks of the boardwalk in tiburon, my father nudging me from way high up, with his shoe. he had been dead several years before his sister told me that he used to hold his breath and pass out on the streets of tokyo, where his parents were presbyterian missionaries. i think he was a little angry; held breath is the ultimate withholding; you're not taking anything in, you're not putting anything out.

i am a little angry too. i feel that we began witnessing the end of the world in super slomo once george w. bush became president, and some days it takes everything i can muster not to lose my hope, my faith, and myself. one out of six women in my area is now being diagnosed with breast cancer. my son is in his teens, and i am in menopause: i have not felt this clueless and tired since sam was a colicky baby. we are both more testy now on a regular basis, quicker to anger, and in my case, to weep and reevaluate the meaning of life. sometimes i feel like the big possum who has been coming into our driveway lately, worried and waddly. i hear that stress hormones possums produce are off the charts. possums live only a few years in the wild. i suppose that if i had two penises and still fainted alot, i'd be stressed to the max, too.

i am fifty, and have only now figured out why you are supposed to have babies when you are young: so that by the time your child is in his teens, one of you is stable some of the time, and you the mother are not racked with back pain and alzheimer's. sam has grown tall and muscular. i have grown wider, stiff and achy. i trip alot and hit my head on cabinets i forgot were there. i get into the shower with my glasses on. and whereas i always had a slim waist, i suddenly have two stomachs - a regular tummy and another one below that, which i call the subcontinent. this older body is both amazingly healthy and a big disappointment. 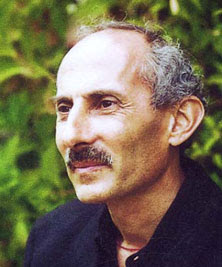 jack knotted a number of blessings into my cord last year when he tied it on my wrist, to protect me from the values and judgment of the world, from the disaster of my own thinking, and to allow me the forgetting of myself. i tug at the red cord constantly: it was an anointing of sorts, and i will take all the anointing i can get. my pastor, veronica, explained recently that in the twenty-third psalm, when david says that his shepherd anointed his head with oil, it referred to the fragrant oil a shepherd would put around his sheep's mouths to prevent an infestation of flies. otherwise, the flies would lay their eggs in the soft tissues of the sheep's mouths, and when the eggs hatched, the sheep would go crazy, butting their heads against trees to dislodge the infestation. when my head is filled with worries and resentments, the cord helps me remember that i was anointed. i am safe, even when my cup is not exactly runneth-ing over."

from: anne lamott's book: "plan b: future thoughts on faith"
Posted by Jessa at 1:25 PM

As one who also has received a blessed red cord sent to me from the Dalai Lama, I can relate completely to the peace one can experience from just being aware of what it represents. The main tenet of Buddhism is compassion. Sounds simple, but wait til you are angered. When you can embrace your enemies for teaching you compassion, then you have made progress. The counting and being aware of your breath is simply a way of slowing down and being more aware of the moment. Good for all regardless of denomination.