i decided to take a train to seoul for the weekend. i managed to get to seoul just fine....but then it came time to take the metro for the first time. talk about madness! the volume of people and the speed at which they were moving was shocking. and the lack of signage in english was a bit harrowing to my beginner korean language skills. it was NOTHING like daegu's metro system! 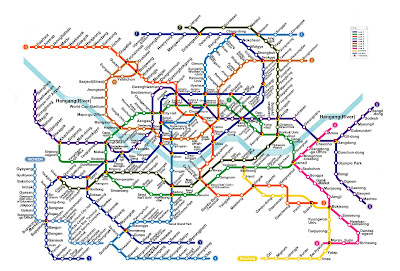 i am used to 2 platforms with 2 sets of tracks. seoul station has at least 8! luckily, a man i had chatted with a bit on the train ran into me right at the precise moment of my confusion! turns out we were both headed to insadong! what are the chances in a city of 12 million people! i have found that in all of my travels throughout korea, kind people have always appeared at the exact moment i have needed help.

i spent all day saturday in insadong, one of the last districts in seoul to retain an atmosphere of the past. on the weekends the main street closes down to cars and the narrow, meandering alleyways are home to piles of art galleries, specialty shops, traditional korean restaurants and tea houses. there are also all kinds of street performers, playing music, doing magic tricks, wearing outrageous costumes!

here is a young woman who gathered quite a crowd to listen to her sing "dear mr. president."i stopped for tea several times while i was shopping and had dinner in the sweetest little restaurant that came highly recommended from lonely planet's guide to seoul. it took me forever to finally track it down and wasn't able to do so until a couple of people actually walked me there themselves! it was nestled away in a corner amidst a maze of twisting and turning cobblestone streets with a sign that read:

the restaurant is famous for its sujebi, which is a soup with big dough flakes in a potato, seaweed and seafood broth. when i walked in an older woman greeted me with a big smile and showed me to a little table in the center of the buzzy full house of happy eaters! the ambiance was warm and rustic....like an old barn brought to life with firelight and laughter.....and smells of delicious food cooking. i was brought an enormous clay pot of kimchi right off the bat and some hot barley tea. nothing like the red pepper spice of kimchi and warm tea to chase the cold of winter away! i ordered my sujebi and it came piping hot. 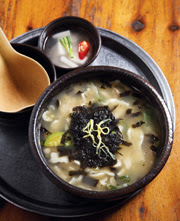 as i started to situate all of my bowls and utensils around on the table, the older woman came over to me laughing and did it all for me! she stirred up my big pot of soup and using a hollowed out gord she dished the steaming hot goodness into a smaller bowl for me to eat. i was pleasantly surprised to find oysters amidst the potatoes, seaweed and leeks....it was AMAZING! i ate the entire pot of soup. it probably could have served three people! i was enjoying the whole experience so much i didn't want to leave! but knowing the ins and outs of the restaurant world, i saw the line up of people waiting and decided to free up my little table. i put on my tuque, bundled up and headed back out into the chilly night.

these street food vendors were putting on a bit of a show for their customers! the food stand next to them is selling what i can only equate with hot dogs on a stick, except they are made from fish.
Posted by Jessa at 3:27 PM

I love this post, I am right there with you! Thank you so much for taking me to Seoul too!