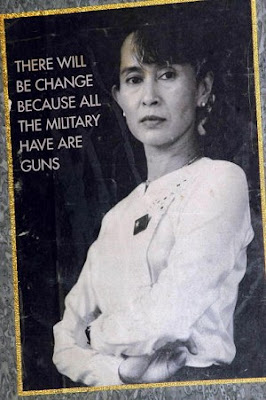 the current situation in burma and a fascinating interview on the american public media radio show/podcast, "speaking of faith," with harvard graduate, anthropologist, and former buddhist nun, ingrid jordt, have impelled me to research the history of this buddhist country. burma, which used to be known as "the rice bowl of asia," is now a country impoverished by its own government. the september 2007 demonstrations by monks and anti-government protestors were in reaction to the regime's sudden and massive price increases for oil and certain food staples, in some cases as much as 500 percent. these price hikes have caused even more devastatingly impoverished conditions. and as you all know, the government responded by imprisoning, torturing and killing many, as well as emptying monasteries.

let me go back in time a bit.....u nu, the first prime minister of burma, after its independence from the british empire in 1948, attempted to transform the country into a modern democratic nation along buddhist lines. he set in motion a lay meditation movement where the buddha's teachings were made available to anyone and everyone. his idea was to build a virtuous society from the ground up. he paid a salary to one person from each village to come and meditate at the center so that they could then return to their village and spread the buddha's teachings for enlightenment. u nu ordered the ministers in his cabinet to meditate regularly to maintain a high level of awareness and virtue. he was revolutionary in that he allowed prisoners who practiced meditation and attained enlightenment to be released, as they were no longer seen as a threat to society. 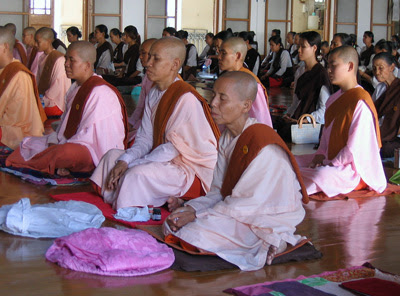 in 1962, ne win led a coup, taking over the country and creating an oppressive military regime. over the years the military government has become intertwined with buddhism. ingrid jordt makes the important point that the borders between sacred and secular are drawn very differently in various cultures. one myth she seeks to debunk is that state legitimacy is based on force or threat of violence. in burma, the regime derives its legitimacy by associating itself with buddhist society. this is done by the military leaders making daily, ritual donations to the monasteries, which are televised for at least several hours per day so everyone in burma can witness the government officials being "virtuous" leaders. of course these actions are not pure and no one is naive to this, but the military believes that having access to the monasteries and being able to make donations to the monks actually is what keeps them in power.
so, in the september protests when the monks took to the streets, the action of turning over their alms bowls was the most powerful statement to be made, on one hand a refusal to accept donations. ingrid jordt argues that it was not solely a political statement though. it definitley had political ramifications, but first and foremost, it was the one action that is permitted by the monks' rules of conduct - it is a rebuke of laity when they threaten the teachings of the buddha or threaten to split the sangha (community of monks). in the "speaking of faith" interview, ingrid jordt said, "it was a rebuke of the very foundations of the way the regime has been claiming the moral authority to rule....the military junta has tried to secure its political legitimacy in buddhist terms. they have really put so much effort into looking like virtuous kings and rulers, but once you've shed the blood of a monk, once you've gone into their monasteries and taken the heads off of their buddha statues to raid them of their jewels and to imprison the lay supporters and even the young monks, the five year old apprentice monks, and take them all and put them into these detention centers......" 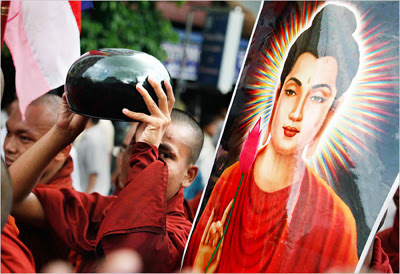 in 1988, ne win, who ruled for 26 years, stepped down from power, which led to massive demonstrations for democracy that were violently suppressed. a new military junta took power. in that same year a burmese woman named aung san suu kyi returned to burma from the u.k. to care for her dying mother. she entered the political sphere to work for democratization, her values being strongly influenced by mahatma gandhi's philosophy of non-violence and by buddhist teachings. she founded the national league for democracy and when the junta called for a general election in 1990, she ran and won by a landslide. the military refused to hand over the power to her and immediately placed her under house arrest. this resulted in an international outcry, but her situation did not change. that same year she was awarded the sakharov prize for freedom of thought and in 1991 was awarded the nobel peace prize. she used the 1.3 million u.s. dollars of nobel peace prize money to establish a health and education trust for the burmese people. 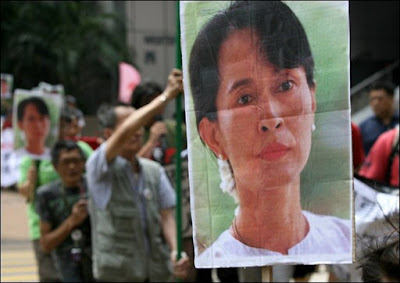 in her book "freedom from fear," aung san suu kyi writes:
"the quintessential revolution is that of the spirit, born of an intellectual conviction of the need for change in those mental attitudes and values which shape the course of a nation's development …
it is man's vision of a world fit for rational, civilized humanity which leads him to dare and to suffer to build societies free from want and fear. concepts such as truth, justice, and compassion cannot be dismissed as trite when these are often the only bulwarks which stand against ruthless power."
Posted by Jessa at 9:09 PM