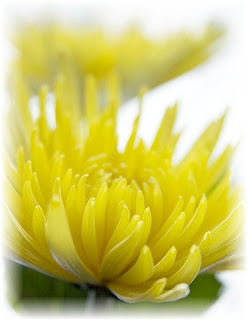 this day begs to be written...

i hopped on the 8am train to mungyeong with my thermos of homemade miso, a small bundle of steamed rice and some dried seaweed. perfect breakfast for a blustery, cold winter's morning. two and a half hours later upon arriving at my destination, my dear friend, soojin, picked me up at the train station and took me to her husband's dental clinic where i received royal treatment. i had two cavities filled and a cleaning for no charge at all. i argued and argued, but it is no use arguing against the korean way of giving. it is a hopeless undertaking and such an amazing practice of receiving and letting in the bounty of it all. the gifted dental care was just the beginning.

we left the clinic and drove a few miles to a very well known potter/tea master's house just outside of the tiny mountain town of mungyeong. as soon as i saw him with his humble monk's clothing, his greying hair and beard and his kind, sparkly eyes, i knew we'd come somewhere special. wolpa songsangnim welcomed us into his teahouse/potter's studio with open arms and gentle demeanor. he, soojin and her husband go WAY back...15 years of friendship. we seated ourselves on cushions on the heated floor at a long, rustic wooden tea table. he served us steaming little cups of boicha (puerh tea). when he'd heard we were coming, soojin said he ran up the mountain and picked some fresh crysanthemum flowers to put in a vase hanging on the wall. the decor of his space was traditional korean style...sparse, zen-like, with just a few pieces of earthen pottery and a sprig of yellow winter flowers that spoke volumes of simplicity and beauty.

wolpa kept commenting that i look like demi moore! (not many foreigners come to mungyeong!!) after about 20 cups of boicha later, we headed out for a fantastic feast of tofu veggie soup and rice with all the usual side dishes. the owner of the restaurant gave us some mountain berry wine as "service" (on the house), so we ate, drank and were more than merry! wolpa's face turned beet red with just two small cups of alcohol and he began speaking in poems, as many koreans do. it was so sweet, so wonderful. his name alone is a poem. "wolpa" means "moonlight on the waves." wow. with a name like that, you're pretty much set.

we returned to wolpa's tea sanctuary after lunch for another hour of relaxing and getting giddy on cha (tea). the mayor of mungyeong showed up and told us that tea saved his life. i guess he has a hole in his stomach and a bum liver from too much alcohol consumption. needless to say, he's quit the soju and now only drinks tea. he swears on it's healing capacities. wolpa served us all a very rare brew called "young ju cha" which translates as "dragon ball tea." it is some sort of bug excrement that is scraped off of the tea leaves (usually puerh leaves that are aging in brick form) and supposedly does wonders for digestion/detoxification. soojin called it by it's true name, "poo tea." after only moments of steeping, the tea is as dark as the blackest coffee. the aroma is much like that of puerh. very earthy, like a damp forest floor. i had to really work with my mind around aversion and absolute disgust at the thought of ingesting bug poo juice...but i quickly rationalized that i've done countless things in the last two plus years of being in korea that have pushed me past my limits of what i thought i could handle (and i'm still alive), so why not add this to the list!? then i took a swig. almost identical to a rich, old puerh. we enjoyed what must have been seven or eight steepings. and yes, it was certainly aided the digestion process.

wolpa makes gorgeous matcha bowls, traditional korean tea pots, tea cups, tea serving bowls, pitchers, vases, etc...everything is one of a kind. the moment we arrived and i saw the tea pitcher he was using to serve our tea, i started drooling. so raw and earthy, rustic and tactile. the shape unlike any pitcher i've seen thus far. later, as soojin and i were wandering about wolpa's studio, admiring all of his creations, i saw a pitcher very similar to the one he was using. i called soojin over and asked her "how much do you think this is!?" i was sure it was at least $300, as his pieces are very expensive and sought after in korea. she just shook her head and said, "mmm...i don't know." he and soojin had a secret discussion a little while after our walk around his studio in which she must have told him of my affinity for that pitcher. later, he brought the piece out to the tea table where we were all sitting and used it to make one steeping of tea and then mindfully dried it and wrapped it up in a beautiful rust colored cloth and placed it into my hands. i actually started crying, overcome with gratitude for the overflowing generosity of the day, which shocked all of the koreans, as emotion is typically not the first mode of expression! however, i know it was very apparent how much the gift meant to me and that fact wiped away any self-consciousness i felt for wearing my heart on my sleeve.

"today i was happy, so i made this poem"

"as the plump squirrel scampers
across the roof of the corncrib,
the moon suddenly stands up in the darkness,
and i see that it is impossible to die.
each moment of time is a mountain.
an eagle rejoices in the oak trees of heaven,
crying
this is what i wanted."

i realize that when i am drinking tea in the company of kind, good-hearted people...and when i am close to nature...i feel well in my soul. 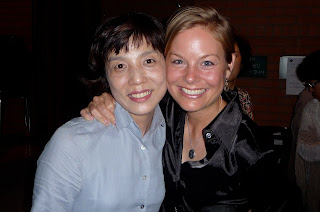 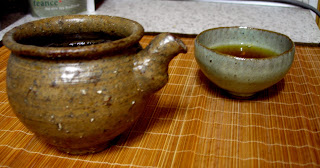 the beautiful pitcher from wolpa...and my favorite tea cup!
Posted by Jessa at 9:26 PM

i spent some time at a tea shop in seomyeon on sunday and wondered "why don't i do this more often?!" i love tea and really enjoyed reading your post. it was seeping with gratitude and joyfulness :)

i'd love to visit the tea shop in seomyeon. is it old style/traditional? what kind of tea did you enjoy there?

the tea shop is behind the lotte - there's actually two of them. i haven't been that often but i'm so glad i finally found some traditional tea relatively close to my apt instead of having to wait for a trip to insadong!

the tea shop has big couches and serves the tea in lovely pottery. it's no smoking and serves popped corn balls with the tea. i'd say it's the new style traditional :)

i had dae ju cha [chinese jujube], service jasmine tea and service meh shil cha [plum - probably my favourite], and for the first time mo gwa cha [chinese quince - recommended by my students and might be my 2nd favourite now]. in the past i've had soo jeong gwa [sweet persimmon and cinnamon], cinnamon and you ja cha [japanese lemon]. i liked all of them too!

it's impossible for me to choose my favorite! i love dae chu cha...and the plum tea...and of course nokcha from jirisan, steeped only for 10 seconds...sublime!
thanks for the tea shop recommendation!

if you want more specific directions to the seomyeon tea shop just let me know :)