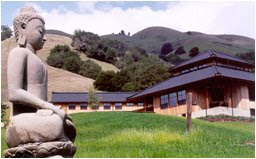 my intention upon returning to korea this semester was to set aside significant chunks of time twice a week to follow a portion of the meditation practice schedule that i had experienced on the spirit rock retreat in california this winter. it consisted of sitting meditation, walking meditation, sitting and walking, then yoga. well, needless to say, things do not always go as planned. i woke up one morning about a week or so after being back in korea and it was like everything i thought i knew was thrown into an abyss of uncertainty, and the things i'd been struggling with went further up in flames. anything i thought i had a handle on was flung a million miles out of reach. for about a month, i felt as though i was feeling my way along in pitch black darkness. i found it to be one of the most anxiety producing experiences of my life. suddenly no direction, everything completely unknown, a cloud of confusion and depression mixed with occasional frenzy settling down around me like a heavy, wet, and sometimes electric, blanket. i discovered that the only way to get through each day was to live, literally, minute to minute. to think about the next day or even the next hour would send me into anxiety.

i found that i could not meditate. i could not listen to the dharma talks given by teachers that i'd taken refuge in so many times before. i couldn't even do much yoga without breaking down into tears or feeling like my nerves were going haywire. i was shocked to not find solace in my aloneness or in the practices that had come to support me so well. i didn't have an appetite for the first couple of weeks and woke with diarrhea every morning (sorry!! i'm from the midwest and we talk openly about our bodily processes!!). this all seemed like a serious wake up call. my body desperately trying to tell me something.

the only things that seemed to alleviate some of the anxiety were to take myself to the gym, to spend time with other people (i'm so thankful that i was part of "the vagina monologues" theater production during this time), receive massage at the yoga center, and to bake! so, just about every day i put on my running shoes and went to ride the stationery bike, sometimes for over and hour...i imagined i was pedaling to africa while watching anderson cooper on CNN. i reached out to family and friends both here and far more than usual. i made way too much banana bread! i booked a massage for every thursday afternoon. shine (my massage therapist) told me several weeks ago that my spirit was always bright but she wondered lately if i felt lonely. i told her i felt a heaviness in my heart these days and that sometimes it felt like loneliness, but that i knew it wasn't about someone else making it better. she understood and said something about mother love. i said, yeah...we have to learn to be that for ourselves, don't we? her mother died when she was seventeen, so she knew what i was talking about in a way that i can't even understand.

i had a couple of intense dreams during this time.

about 10 days after returning to korea i dreamed...
i am walking down a path in a jungle that i walk every day to get where i need to go. on this path, i have to walk past a vendor with tables covered in blue tarp who also has snakes. the snakes slither to and fro across the path, so every time i pass by i am alert not to step on their slithery bodies. i feel some fear but it is so routine now that i don't think much of it. on one particular day i walk past the man, his snakes and his vending tables, and for some reason i turn around to look behind me after i've turned the corner and made it safely by. there is an unusually large snake with a big, red head over by the tables. as i look, the snake approaches me quickly. when it reaches me it levitates its entire body in the air and comes straight at my solar plexus, biting me right in the gut. i wake up filled with a rush of adrenaline and fear. i say to myself, "holy sh*t - what was THAT?!" i lay in bed awake for quite some time, wondering what on earth is going on.

i had a second dream, two weeks later...
i am in an airplane on my way back to san francisco from korea. there is sudden turbulence. i grip my seat feeling terribly afraid, but the turbulence subsides and i relax again. then suddenly the plane starts nose-diving, plummeting downward out of control. i am certain i am going to die. horrendous fear fills every cell in my body, it is totally somatic. i brace myself in preparation for the physical pain i imagine i will feel upon crashing and dying. it feels like i'm in this space of free falling, feeling as though i'm going to die with the plane diving downward for hours and hours. there is a point where i realize that maybe i will die instantly upon impact and won't feel a thing. upon this realization, i start to focus on my breathing and it calms me somewhat. suddenly we hit ocean water (i'd forgotten we were flying over the pacific) and we are all still alive. water starts gushing into the plane and we have to hurry to get out. i turn and see that the woman sitting next to me is someone i went to grad school with. she is a strong, sturdy, no nonsense woman. she gets out of the plane without grabbing her bag from the overhead compartment. i hesitate, unsure of whether or not i should leave my backpack. i decide to grab it and then i crawl quickly out of the plane onto a dock that just happens to be in the middle of the ocean!

going down in a plane has been a recurring dream for years now. i have always woken before crashing. this was the first time where the plane completed its descent. upon waking, i felt amazed and euphoric that i didn't die in the dream! i'd felt so sure that i would. in the past i've always woken filled with the rush of fear, thinking i'm going to die. but with this particular dream, i went through that feeling in the dreamstate and came out the other side, waking in awe and amazement that it had not turned out as i'd so deeply feared it would. this dream had an enormous impact on me, and i've felt in days since that it has given me access to a source of strength and courage inside that i hadn't been aware of before.

this morning, out of the blue, i decided to try meditating again. it's been almost a month and a half of not sitting. i chose to do a guided meditation led by jack kornfield, and then listened to debra chamberlain taylor's dharma talk titled "letting go into the golden wind." there is a part i'd like to share that particularly hit home...

debra goes on to say, "steep assignment!! why? because we cling all the time to everything, don't we?! sitting in meditation we can notice...i cling to my stories, i cling to my emotions, even when they are painful. i cling to plans, opinions, judgments..."

debra explains how the buddha did not say that we are sinful or bad for clinging so much, he simply compassionately pointed out, "my dear friends, the cause of your suffering is this clinging and the possibility of your peace and freedom is in your opening and letting go. it is the whole of the dharma."

in the tibetan buddhist teachings, it is said that "the state of enlightenment is the ultimate relaxation." imagine that....feeling completely relaxed in the body and mind, no holding or gripping, no bracing or anxious tension. just soft, languid openness...muscles fully let go, bones surrendered to gravity, mind quiet, not concerned with the clouds of thought that inevitably pass through.

one thing has emerged from this free fall into uncertainty and that is that i want to travel to kripalu in massachusetts this summer for a month-long yoga teacher training retreat. most of all, it is for the deepening of this journey of learning to let go in the body/mind...from the inside out. taking part in this in-depth training feels like the next authentic movement that wants to happen in my life. the rest still remains a mystery.

i'm sorry to hear you went through such a rough time. although it might be the sign of some significant personal development. my naturopath says, about physical ailments, that things get worse before they get better ... maybe the same can be said for emotional ailments ... e.

Jessa, this is a remarkable post. Those dreams are filled with power for you - deep courage developing during your dreamtime, and that you feel now in the waking realm. Thank you for candidly sharing these experiences. I'm sorry you're struggling so, and yet it seems required at this time - mystery, mystery, mystery as to how our life unfolds and for what reasons things happen. The Buddhist words must be of great comfort to you - the one's about clinging - I needed them, too, so thank you for that bit of medicine.

When I read about you taking yoga teacher training, I immediately thought to myself - "oh, wouldn't it be excellent and powerful to have Jessa as my yoga teacher?"! If you resettle in the Bay Area, let me know when and where you'll be teaching. :-)

Much love to you, friend.

thanks, ellen...i think what you're saying is true...it really feels as though in the process of letting go more and more into the mystery, it does get harder as the old way of hanging on so tightly rears its ugly head so fiercely...

and lisa...what a joy it would be to practice yoga with you! and i have not forgotten about "final passages." i would love to go through that training experience with you sometime in the next couple of years if it still feels like something you want to do.
thank you for your support around what i've been experiencing lately. i can feel it across the miles. love to you both, jessa

came across this old post ... was the yoga teacher training one of the things you did this past summer?