de-stressin' at the pig house 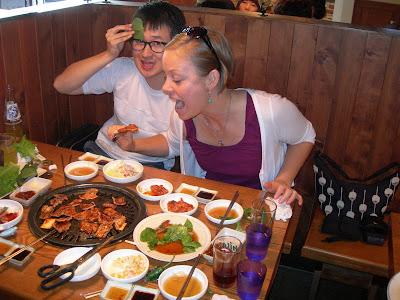 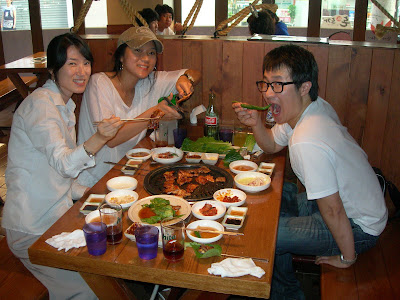 a friday night out with some of my students from last semester. they took me to "the pig house!" samgyupsal (a small piece of grilled pork wrapped in a lettuce leaf with grilled garlic, onion, mushroom, sesame leaf and "special sauce") is one of the only ways i will do pork. that and a good ol' BLT!
all three of them are studying hard to pass the TOEIC exam this fall so they can apply for foreign exchange student programs in the u.s. and canada. the competition is steep. after dinner they headed off to more english classes and study groups. on a friday night. it amazes and disturbs me what stress the students go through here in order to get ahead.

i'm in the middle of listening to an interview with dr. esther sternberg on the radio show, speaking of faith. she is a rheumatologist and researcher, author of the book, "the balance within: the science connecting health and emotions." i highly recommend giving the interview a listen for an insightful look at stress, perception, the stress response and the impact on the mind/body. the connection between the nervous system and the immune system, i found fascinating. with the frantic pace that is becoming the lifestyle of so many people worldwide, it seems that many of our illnesses now and in the future will be traced to inappropriate stress response, staying in flight or flight for too long or not long enough, which apparently has A LOT to do with perception.

"the brain and the immune system continuously signal each other, often along the same pathways, which may explain how state of mind influences health."
-from esther sternberg and philip gold's article, "the mind-body interaction in disease," published in scientific american
Posted by Jessa at 8:16 PM